A Guide to Races: 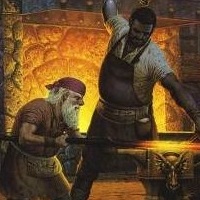 The early history of the Ironfists is tied up with that of the Stiffbeards for Thelor, the Father of the Ironfists and Thulin, the father of the Stiffbeards awoke together in the halls of Kheledkhizdin. For a time, they lived together, but no people with two kings can live along side each other without strife. Gradually, disagreements, greed and jealousies arose between the two dwarf fathers, dividing their peoples and creating conflicts. Of the two, Thelor was the bigger aggressor and the rift between them was exasperated when Melkor discovered them and manipulated the situation to his own advantage. Recognizing the natural greed and jealously that resided in Thelor, Melkor was successful in instilling resentment and envy towards the elves and Men who remained loyal to Eru Iluvatar and the Valor. Aule's willingness to destroy his creations at the word of Eru Iluvatar did not sit well with Thelor, and the truth, that Eru Iluvatar had accepted the dwarves and Aule's grief at the thought of destroying them was kept from him. Melkor also twisted Yavanna's fear for the trees to further convince Thelor that the Valar viewed the dwarves as a blight, vermin that ruined the beauty of Arda and that he and his followers were the only Ainur who sympathized with them because Melkor's 'creations' were viewed in the same light. Faced with the false knowledge that his people were a creation that was unwanted by their creator, and unwanted by the being whom created him, Thelor bound the Ironfists to the service of Melkor. Thus, in the early days of their existence, a spiritual divide was created between the Ironfists and the Stiffbeards that paved the way for them to be enemies.

The maneuvering of Melkor to corrupt the perceptions of the Ironfists (and other peoples that were vulnerable to his influence), resulted in the Battle of Palisor in the early years of the First Age. Thelor II and the Ironfists fought on the side of Melkor in that battle. As a result of the disaster at Palisor, the Stiffbeards and the Ironfists parted ways as the Stiffbeards could no longer tolerate an alliance with them. The Ironfists made their kingdom in the Mountains of Rhun, where they had regular contact with the Easterlings, and their relations with this race of Man were not always cordial.

Due to these early conflicts, the Ironfists had grown to acting out of self-interest and martial prowess, rather than loyalty, honour and hard work at their crafts became the core creed of their culture, and main motivation for doing anything. They felt no shame at all in accepting gold in exchange for forging weapons for the Easterlings to wage war on the Peoples of the West. Ironfists that rejected this were often killed or cast out of their society.

The Ironfists are no stranger to bringing war on to the other dwarven houses. They have already had conflicts with the Stiffbeards numerous times during the First Age, but at the beginning of the Second Age, Thelor III brought his people into conflict with the Longbeards when he attempted to take over Gundabad, the awakening place of Durin.

It must be noted that not all of the Ironfists were convinced that their allegiance to Melkor, and then to Sauron, was a wholesome thing. Some had studied their history and saw that the wars fought on behalf of Melkor only brought suffering to their people. Others, traveling beyond Rhun and meeting elves and dwarves of the other houses were exposed to a different account of those early years and the creation of their people. This was a truth that had been hidden in their hearts and when it was revealed to them, they were freed from the lies of Melkor.

One such Ironfist was Thulin, the brother of Thelor V, who attempted to save his people from the deception by killing his brother, only in turn to be killed by Thelor V's daughter, Thris. Threlin I took to the throne after his grandfather's death.

In addition to supplying Sauron's army with weapons during the War of the Last Alliance, Orn, the King of the Ironfists accepted gold from Sauron to fight on his side of the battle, particularly at the Battle of Dagorlad. Here, they came into contact with the Stiffbeards once again who had answered the call to help the Elves and Men of the Last Alliance. Not all of the Ironfists took part in this, as some were reluctant to fight on the field against the Longbeards who were also fighting along side the Elves and Men. Orn's actions during the war, and the willingness to supply the enemy of the Free Folk with weapons earned the Ironfists a bad reputation among the other dwarven houses, furthering the shame and disgrace that had began in the Elder Days with the Battle of Palisor and the conflict with the Longbeards over Gundabad.

In all of their history, the only time when the Ironfists were united with the dwarves of the other houses was when the dragons made war upon the dwarves from 2570 - 2589 of the Third Age, as the dragons were indiscriminate in their attacks upon the dwarven settlements. Many of the Rings of Power given to the dwarves were lost during this war, with the Rings being destroyed along with their bearers, but the fate of the one given to the Ironfists is unknown. It is largely assumed that the Ring made it way back into Sauron's possession after an heir of Thelor bearing it was captured, but it is also possible, given the Ironfists history of being under the thrall of Melkor and Sauron, that the Ring is still in the possession of an heir of Thelor at the time of the War of the Ring.

The exact time-line of events is sketchy, because accurate record of events have never reached the West.