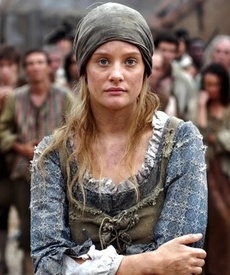 Life has taken its toll on her appearance, especially since Lit died in the Battle of the Five Armies. She is rather a thin looking dwarrowdam, so much so that most dwarves consider her thinness unhealthy, and has long, light blonde hair. In contrast, before Lit's death, she was more robust in her build. Before her marriage and during it, she was very meticulous about her hair, ensuring that she kept it styled according to Dwarvern custom, including the beard that even dwarf women possess.

After the loss of her husband, this changed - she shaved her beard off in grief and continues to do so and only styles her hair in the manner of a widowed dwarrowdam. Her father was quite wealthy, if not quite on the level of of the non-exiled nobles and Durins, and before the loss of her husband, she lived quite comfortably. As a result, she was able to dress in clothes that were well-made, if not as elaborate as those of noble-dwarrows not living an exiled life.

Her favourite colours are pastel ones - light blues, greens, pale yellows, lilacs and dusky pinks, so many of her clothes use these colours. Because of her work, she usually wears an apron to protect her clothes from damage and dirt. Her love of pastel colours also extends to gemstones, not that she has many pieces of jewellery - they are mainly pieces that her mother owned, her father and husband gave her as gifts and hair-beads she used to style her hair.

She is not a dwarrowdam prone to seeking travel and adventure, so she usually wears dresses and skirts, but she owns traveling clothes in case they are required, though other than the journey from the Iron Hills to Erebor, the furthest she ever goes is the rebuilt town of Dale.

Beyla is a quiet, kind-hearted dwarrowdam who cares about the welfare of others. This aspect to her nature is what caused her to become a nurse in the healing halls of the Iron Hills, and later in the healing halls of Erebor after the Battle of the Five Armies. Being quiet, she is observant of the environment around her and takes a lot in, but she is not afraid to voice her opinion or give advice if she thinks it is needed. She is also hard working, which is needed in her current work as a house keeper, and loyal to those she works for. In dealing with her two sons, who mean the world to her, she is strict, but fair.

Beyla was born in 2781 of the Third Age to a dwarrow merchant living in the Iron Hills. She knows nothing of her mother, because she died giving birth to her, leaving Beyla's father to bring her up alone. Beyla's father was a baker, specializing in sweets and pipeweed seller by trade and ran a small shop. The business did quite well, because dwarrows have a love of smoking and consuming baked goods. Once she was old enough, Beyla began to learn her father's trade - this consisted of learning to bake, cook sweets and book-keeping.

She also had her own interests and began to help out in an informal way in the halls of healing when she was almost of age. The busiest times for her father was on threshold of winter, when Durin's Day was anticipated to occur when many Dwarrows wanted to celebrate the event with feasts. The Winter Solstice or Yule, and the beginning of Spring were also busy times, even if they didn't quite match the frenzy of Durin's Day. In those days, Beyla split her time between working in the healing halls, where her duties consisted of cooking food for the patients, ensuring they took their medication when the trained healers were busy elsewhere and generally seeing to their comfort.

It was while she was working in the healing halls that she met Lit, a young guard who was visiting a friend who had been injured in a skirmish with bandits. Lit began to court her and when she reached her one hundredth birthday, they married. She gave birth to their first son, Dreng, in T.A. 2901, and their second son, Bivor was born in T.A. 2911. During the years when her sons were babies and toddlers, she gave up her work in the healing halls and worked solely for her father, only going back to the healing halls once they were old enough to not need her attention all the time.

Life was good, but in T.A. 2941, her life was changed forever when Dain Ironfoot was summoned to Erebor to assist Thorin Oakenshield in defending the Lonely Mountain. Beyla and her sons traveled with a column of dwarves traveling behind Dain's Army to offer support in food and medical supplies. Lit was a causality in the Battle of the Five Armies. During the days and weeks that followed this disaster, Beyla worked in the halls of healing, caring for the wounded. It was here that she met Prince Kili, though she had no idea whom he was at first, only finding out once he was coherent enough to ask after the fate of his uncle and elder brother, fearing that they were dead. It was caring for the prince during his long recovery that gave her a purpose after the loss of her husband. Her appetite was low and she ate little during the first few weeks after Lit's death, causing her to lose the robustness she once possessed. Approximately two months after the Battle of the Five Armies, she received news from the Iron Hills that her father had died from a contagious winter illness that swept through her former home. Spring arrived and the prince had recovered enough that he was able to leave the halls of healing and the weather was fine enough for her to travel, so she and her sons went back home to see to the affairs of her father's estate.

It was a sad home coming for the dwarrowdam, not just because of the death of her father and the absence of her husband at her side, but because she found that in her absence, the dwarrows who'd worked for her father had taken advantage of this and stolen all his gold and valuables. Enough time had passed since his death for there to be no trace of the workers in the Iron Hills. Her own home she'd shared with her husband had been untouched, but she felt that she couldn't stay there - the memories of her husband and the betrayal of those in her father's trust made that impossible. She arranged for the sale of her father's estate and her home (the shop, at least, was something that those unscrupulous workers could not have stolen!) and traveled back to Erebor with her sons and all the belongings they could carry on a cart.

Unlike the journey to the Iron Hills, which was relatively uneventful, aside from the normal rigors of traveling, the journey back was different. Ever since the sack of Lake Town, an event that many Lake-men blamed on the dwarves, there had been small bands of men who had turned to unsavory methods to make a living - not that they hadn't done so before the burning of the town - they were just now more desperate, more needy and more willing to commit crimes to make a living. Dale was far from rebuilt, though the honest men and women did their best to scrape by while the town was rebuilt, but it was not easy. On the road, with the few possessions that she managed to get on to the cart, and the money from the sale of her home and her father's estate, Beyla and her sons were set upon by a group of bandits. The dwarves and their goat were unharmed apart from a few scrapes and bruises, but almost everything of value had gone. Disheveled, Beyla and her boys turned up late one evening in Erebor, soaked through to the skin because a rain storm had been raging since the afternoon.

The next morning, she sought an audience with the prince, but Kili's housecarl, Lofar, a grumpy, bad tempered dwarrow, only saw a scruffy vagabond and was inclined to throw her and her sons out of his halls. Kili happened to be passing, and over-heard the exchange, dismissed the housecarl and led her to the room he was developing into his study to hear her out. He recognized the dwarrowdam from the healing halls, and her sons whom had kept him company through those dark days and offered her a place in his halls as a house-keeper, which she accepted.