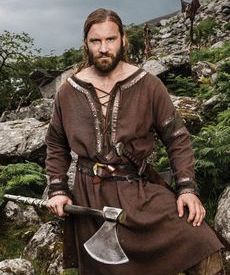 TIME-SCALE: The Hobbit and LOTR (He may or may not be the Loni who went to Moria with Balin. Not decided yet.)
RACE:Dwarf
AGE:142 (approx)
YEAR OF BIRTH: Third Age: 2799
PLACE OF BIRTH: Dwarf camp in the valley of Azanulbizar
SEX: Male
OCCUPATION: Guard
MARITAL STATUS: Single
SEXUALITY: Straight
PARENTS: Father: Sindri, Mother: Vrindr
SIBLINGS: Andvari (brother)
SIGNIFICANT OTHER: None
CHILDREN: None
LOCATION: Erebor
WEAPON(S) OF CHOICE: Loni is proficient with all melee weapons, but his favourite choice is the war-hammer.

At 1.5m (4ft 11), he is quite tall for a dwarf, which is an advantage for his chosen occupation, which also ensures that he has a muscular build.

The majority of the time, is wearing brown leather armour while he is working. In battle situations or in situations where he knows he is likely to encounter violence before hand, he wears chain mail. He finds heavy armour makes him clumsy and slow, so he avoids it where he can. Formal occasions may require that he wears it. All of his armour is crafted by his brother, Andvari and Lady Bild, whom his brother is apprenticed to. When he is not working, he wears simple home made garments that have been crafted by his mother out of fur from animals he, his brother and their father have hunted, or out of fabrics and wool that are available in the Blue Mountains. Later, when he moves to Erebor, these are made by Lofnheid, his sister-in-law.

His hair is light brown, long (as is common for most dwarves), and usually unkept and scruffy looking, but he makes an effort with it during formal occasions or when he is likely to be in the company of nobles and royals. This isn't often as in Ered Luin, he is not high-ranking in the guard. As he has no wife, it is usually un-braided, unless his mother gives it some attention.

He sports a few minor scars here and there when he has been less than attentive while training, hunting and in skirmishes with goblins and dwarven outlaws that are scattered throughout the Blue Mountains.

Loni has a lot of courage and will not hesitate to put himself in danger to protect those he has sworn to protect.

Honour and loyalty are very important to him, both on a personal and professional level. As such, Loni is very loyal to his family and the royals he serves. His training as a guard has made him very disciplined and he avoids the vices which would attract those of a lesser will. He is hard working, perhaps a little too hard working and needs to learn to relax, which isn't an easy thing for him to do because he feels the weight of his responsibility for the safety of his Prince and his family weighs heavily on his shoulders. He expects the guards under his command to hold up to the same ideals and standards of himself.

However, he would be very lonely if it wasn't for his brother, his sister in law and nephew, Nali, and longs to find the kind of companionship that his brother as found in his Lofnheid.

Like many dwarves, Loni enjoys good food, home brewed beer and spending time with his family. He has a disliking for vices such as smoking, laziness in the other guards, messiness (the latter is an improvement from when he was a dwarfling, because he was always making a mess, at least that's what his mother says.) and muttering.

Loni can be stubborn and inflexible in his work. He also finds it difficult to relax, for example, he is always on the alert for trouble. Although this is a good a trait for his line of work, it could lead him to become fatigued or burnt out if he doesn't take a break from his work. His stubbornness and inflexibility can sometimes get him into trouble with is superiors or cause him to have disagreements with his colleagues.

His main goal in life is to work his way up through the ranks of the guards and to prove himself to be as worthy as his father was before he retired. On a more personal note, he would like to have a family one day, but his line of work and the scarcity of dwarf women make this difficult for him. It wasn't something that bothered him a lot before moving to Erebor, but seeing his brother with his wife and child has made him realize that being a guard is not enough for him anymore.

As he holds honour in high regard, he fears losing it and bringing shame on his family. He is afraid of failing to protect the Durins and more generally, his people from the many hostile beings that prey on them. Losing any member of his family, especially his brother and, later, young nephew, are the biggest fears he has.

Sindri fought under the command of Lord Fundin, a cousin of King Thrain and the father of Dwalin and Balin during the War with the Orcs. Although Sindri would have preferred Vrindr and Andvari to be far away from the war, his wife helped with the army's supply train and helped care for those dwarves who were wounded in battle but lucky enough (or unlucky, depending how you looked at it) to survive their injuries. After the battle was over, and many dwarves lost, including Lord Fundin and Prince Frerin, Sindri and Vrindr with their young family made the journey to Ered Luin. The horrors of war and the loss of the lord he served caused Sindri to retire from the life of a solider and he became a lumber jack instead, supplying timbers to help restore the long neglected mines and underground halls of the Blue Mountains.

In addition to raising her children, Vrindr brewed ales and meads for the taverns and the mead-hall, but they made no secret of Sindri's past as a solider and brought them up on tales of his time in the army. As a child, Loni was fascinated with these tales of warriors and war, and vowed to follow in his father's footsteps. Life is not easy even for the Durins and noble dwarves in Ered Luin, so it was quite easy for young dwarves to become disenchanted with their lot, and having access to his mother's brews, Loni became quite wild in his mid to late adolescence, developing a taste for drink and tavern gambling. It was only after spending some time on the wrong side of the bars for a few days after an incident in the tavern that his parents refused to save him from that he came to realise the path he was headed down and changed his ways. When he was old enough, he began training to be a guard in Ered Luin. His first posting was at the dwarvern outpost of Noglond, located in the Vale of Thrain on the outskirts of the main dwarven settlement. His early missions consisted of keeping unoccupied ruins from becoming enclaves of goblins who would attack travelers and hunters if they were left unchecked. Occasionally, descendants of the Firebeards who had stayed in the Blue Mountains would cause trouble for the (in their view), interloping Longbeards who had taken up residence in their abandoned mines and halls which the guards had to deal with. During his training, Loni turned from being a hedonistic young dwarrow to one that took his responsibilities seriously and developed a tendency to work hard. His mother became increasingly worried that he was over-working himself and encouraged him to take up interests outside his work. He took up brewing ales, fishing and making wood carvings from the cut-offs of his father's lumber that were too good a quality to be turned into fire-wood. Around this time, he also bought his first riding goat.

Andvari developed an interest in metal work and working at the forge, so he became the apprentice of the dwarrowdam blacksmith, Lady Bild, who was a friend of his father's. She had fought at his side in the War with the Orcs.

After Thorin and company left on the quest for Erebor, he, to find news of her brother and his family because she'd not heard anything about them for some time, and Andvari accompanied her because he wanted to continue his craft because if Thorin and his company were successful, Bild planned on staying in Erebor, whether she found news of her brother or not. Loni accompanied them because he didn't want to let his brother go alone, and to join the guard once Erebor had been restored. They found no news of Bild's brother or his family at all on the journey. They arrived at Erebor in the aftermath of the Battle of the Five Armies and helped with finding wounded. It was then that Bild found some news of her brother's family because they met her niece Lofnheid among the survivors. The king and his nephews were badly injured in the battle and once Kili had recovered, Loni became a guard in his halls, and after some feats of great service, eventually became the captain of Kili's guard.

Times were difficult following the Battle of the Five Armies, especially as for some time, it appeared that Thorin and his nephews wouldn't recover from their injuries. There was some light in those dark days - Andvari began seeing Lofnheid and were married in the summer of 2943, and had a son, Nali, nine months later.

When he's not on duty, he brews beer, makes wooden carvings of animals and spends time fishing in the river. He has a war goat called Tanngnjóstr. He views smoking as a deplorable habit and refuses to touch tobacco (aka pipeweed) of any kind because he thinks it detrimental to being a guard.