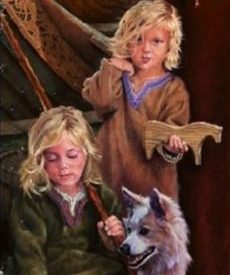 He is a dwarf of the age equivalent to a seven year old human and is still growing. As he is the youngest of Beyla's children, he is smaller and weaker than his brother. He has the same hair colour as his mother and brother and wears the clothes and boots that Dreng has grown out of.

He is shyer and less inclined to enjoy outdoor pursuits than his brother, especially those of a sporting or competitive variety because he rarely wins them, due to being smaller and weaker. As a result of this, he is more inclined to be bookish and enjoys games in which he uses his wits more than brawn. If he was older and more experienced, he would beat Dreng more easily than he does at the physical sports that Dreng enjoys.

Bivor was born in the year 2911 of the Third Age. He is more studious than Dreng, partly due to the fact that this has been forced on him because of the lack of success he's had with the physical sports that Dreng loves, and in some ways, it is often a source of conflict between the two - Dreng likes to tease him because Bivor is not as good as he is. This is something that Bivor has resigned himself to, with some reluctance, but being different has its benefits. Bivor sometimes accompanies his mother in the healing halls, and finds it a fascinating place to be, though he is not often allowed there when it is busy, or when there is an outbreak of illness for his own safety.

Although he doesn't enjoy baking, or cooking in general, helping out his grandfather is less of a frustration for him than it is for Dreng because he likes helping his grandfather with the accounts of his business, and Bivor is the favourite of his grandsons.

Before his death, Bivor didn't have as close a relationship with his father as Dreng did, because Dreng was the one most likely to follow in his footsteps as a solider. In contrast, Bivor was most likely to want to be a scholar or healer of some kind, or perhaps take over his grandfather's business when he was old enough - if he could find someone to do the chores he disliked doing - the baking and cooking. Although Dreng probably had more success at gaining friends, Bivor had more chance of becoming prosperous as an adult because of his bookish ways.

There came a time when his father thought he would attempt to 'toughen' Bivor up by taking him on a hunting trip with himself and his brother. Bivor found he had no taste for it - he disliked seeing the animals killed, though this was an attitude that his father thought he would grow out of when he got older. The kill's of the merlin hawk didn't upset him as much as that involving the ferrets as it seemed quicker, more natural and the merlin was hardly ever hurt - in addition to hating seeing the creatures killed, he didn't like seeing the ferrets injured. At some point, shortly after he started accompanying his father and brother on hunting trips, his father gave him a ferret to train and care for (because he wanted the boy to know responsibility and to change his views on hunting), but instead Bivor ended up making the creature into a domestic pet, something which earned him more teasing from Dreng.

Like Dreng, he thought that that the call to Erebor would be a grand adventure, but he was disappointed that he had to leave his ferret behind in the care of his grandfather. His mother convinced him that the creature would be better off there until they could retrieve it when the situation was calmer. The loss of their father in the Battle of the Five Armies made the bond between the brothers stronger and Dreng ceased his teasing of him. Of course, the loss of his father and then his grandfather shortly after hit him hard, and as he was closer to their grandfather than Dreng was, Bivor felt the loss of his grandfather more than Dreng did.

Bivor now looks forward to a new life in Erebor.