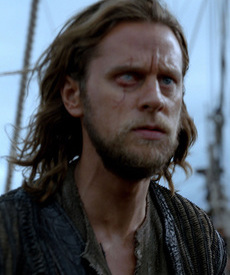 Athiof's personality traits can be summed up thus - rogue, gambler, thief, swindler, lay-about, lazy. He will do anything for money, as long as it is a quick gain and relatively effortless. He lives for the moment and often does not think about others, or the future. He is reckless and can seem quite charming until his betrayal is revealed and his true nature is seen. He can be quite self-pitying and blames others for the misfortunes he experiences, but aside from some initial prejudices he encountered in his youth because of his heritage, most of the troubles he encounters are those of his own making. Once, he did attempt to change his life and outlook, but fell back into old habits.

Athiof is a Firebeard, a descendant of those dwarves of Ered Luin and the dwarven city of Nogrod that was destroyed at the end of the First Age. It is possible that he has some Broadbeam heritage in his blood, as they lived in the same area. Being a Firebeard means that he has inherited a tragic legacy, one which has had a negative impact on most of his life. Firebeards have a bad reputation among many of the races and groups found in the West because of an incident that occurred during the First Age with the elf King Thingol. The Firebeards are blamed by many for the enmity that exists between the dwarves and the elves because of the murder of King Thingol and the war over possession of the Nauglamir. They are looked upon with suspicion by the Longbeards and it is unlikely that they would ever find welcome in any houses occupied by the elves. When outside of their own territory they find it difficult to settle anywhere because they are seen as thieves and oath-breakers, though the cause of it has long been forgotten by most races - the reputation of misdeeds persists. Not all Firebeards are bad, they can be as varied in their habits as any other race, but it is difficult to fight against negative perceptions and many succumb to the stereotype that is put upon them, even if their intentions started out as good at first. Athiof is one such dwarf.

After a string of troubles and misdeeds, he is forced to leave Ered Luin and discovers that he has no welcome anywhere, not in Breeland, not in The Shire, his encounter with elves is the worst and he barely escapes with his life. Eventually, he decides to go the Iron Hills where he's heard that a dwarf settlement lies - it is so far away from Ered Luin that he hopes that there he can hide his past start a new life for himself. He does everything that he can to hide his appearance that marks him out as a Firebeard so that he can find peace. After his rescue at the hands of Hlevang and Moidvithir, he sees his chance to turn his life around. Hlevang has some sympathy for him because he too was forced from his home - the homeless must care for and look out for each other, right? He works his way up to join the guard, with Hlevang vouching for him.

Despite his efforts, he can't quite rid himself of his deceptive inclinations - they are deeply engraved in him and enhanced by the treatment he has received from others, often finding himself in trouble with the authorities and senior guards. Only Hlevang prevents him from giving up and leaving the guard voluntarily, but his bad behaviour continued and he was on the verge of being drummed out of the guard completely when the call to Moria comes. He's allowed to accompany the army sent by Lord Gror, but only on the basis that they need all the hands they could get rather than that he was seen as having value to the guard.

Athiof survives the war, but is devastated by the loss of Hlevang, one of the few dwarves who ever believed that he could be anything more than a criminal. To honour his friend's memory, he vows with Moidvithir to care for Skafid and Dori, a task which he eventually fails at because without Hlevang to stabilize him, his behaviour degenerates and he falls back into his old ways. Back in Ered Luin, his past comes back to haunt him, despite his efforts to break away from it, and this in conjunction with poverty for Ered Luin is far from the rich place it was in the First Age and before, ushers in a cycle of leaving to escape persecution, returning, and leaving again until one day he leaves and fails to return. He leaves Skafid with another son, Nori, but not even that is enough to make him stay. His fate is unknown.