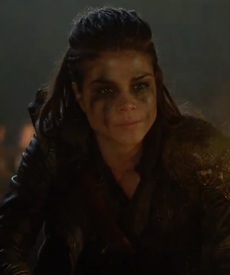 Radsvid is quite robust for a dwarrowdam, thanks to her time in the guard, and stocky, weighing in at 57kg. Her stockiness is down to muscle, rather than over-eating. She is tall for a dwarrowdam, standing at 1.34m tall, but is still small in comparison to the tallest of dwarrows. Her hair is long and black in colour, which she usually keeps tied up in neat, but uncomplicated braids, as she figures complicated braids are for more genteel dwarrowdams than herself. She wears leathers and chain mail while on duty and in times of formal occasions she dons armour, rather than dresses because being in the guard, a show of armour is seen as more of a display of dwarven wealth than any amount of fancy fabrics ever could. During times of crisis, such as the Battle of the Five Armies, she also wears armour, rather than the more comfortable leathers and chain mail at other times. When she is not on duty, her clothing is simple woolen tunics and dresses (when she has an inkling to wear such things), and she is more likely to wear jewellery which would be an encumbrance at other times.

Radsvid carries herself with an air of confidence, born out of her military training and is not afraid to get involved in scenes of trouble, when she is on or off duty. She has the same dedication to her work and honour as Loni does, and that is why, when he was promoted to be the captain of Prince Kili’s household guard, Loni chose her to be his deputy, having worked with her in the past. She is uninterested in romance, being more dedicated to her work than her personal life and does not see how bearing and caring for children could fit into her working life, nor seeing how she could have the time to care for the needs of a husband who’d be as equally dedicated to his craft or occupation. Events of her past have left her fierce and hardened in her outlook.

Radsvid was born in the year 2817 of the Third Age. Her ancestors moved to the Iron Hills when Gror founded his kingdom there in T.A. 2590. There, they established themselves as miners in search of precious ores, gems and metals, or served in the guard. When she was old enough, she joined her mining relatives in the mines, working along side them, but her heart really lay in joining the guard. It is not unheard of that a dwarrowdam joins the guard, but it is unusual, and her family was rather discouraging of it, but in her mind, Radsvid didn’t see how the guard could be any more dangerous than the mines as there was always the threat of cave-ins and incursions from goblins and orcs to contend with, along with dangerous wild creatures of the deep that liked to make their homes in the mines, especially in those that had lain abandoned for some time. The work made her strong, and eventually, her family came to see her point of view when she and a group of miners were trapped in a cave-in. A number didn’t survive, crushed by the rocks from the initial cave-in, or by the consequences of the cave-in. Radsvid was one of the lucky ones and due to that experience, her family relented. When she came of age, she was allowed to apply to join the guard. After many months of training, she was accepted in the guard on a trail basis (a process which all the recruits went through) and excelled at the tasks given to her. Her early years in the guard were made up of keeping the out-lying lands surrounding Dain’s kingdom safe from incursions by orcs and wargs, and the mining tunnels free from goblins. She was relatively low-ranked in the guard and, in 2941 of the Third Age, marched with Dain’s army when they answered the summons of Thorin Oakenshield to the Lonely Mountain. After the battle, she decided to remain behind as a member of the guard there.