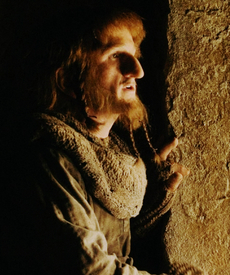 Ori is quite young in appearance, and in the days of the Hobbit, only has the short beard of a young dwarf - beards become longer as they age, unless they decide to cut it. His hair is quite short, but it is long enough to braid and he usually has thick braids in his hair. In stature, he is of medium build for a dwarf, but not fat, strong or muscular, either.

In regards to clothing, what he wears is limited because of his station in society - typically, he wears rough spun clothing, some of which is knitted. Fabric colouring dyes are quite hard to come by or produce in Ered Luin, so most of his clothing retains it's natural colour and mainly various shades of brown and beige. Sometimes his mother (who is an avid knitter), is able to get hold of dyes to colour the items she knits, so there is a rare scarf or pair of gloves that are dyed.

Ori's main goal in life is to be a scribe, a trait that has been heavily influenced by his oldest brother, Dori, whom, because of the absence of Ori's father, and being significantly older than him, is a father figure to him. He also particularly looks up to Balin since he is Thorin's main statesman, scribe and academic tutor to Fili and Kili. Above all things, Ori loves reading, learning, writing and drawing. In addition to his the dwarven language of Khuzdul, and Weston, he is learning the elven language of Quenya, and has a fine hand in Tengwar, but he is yet to be fully fluent in it. Ori is a peaceful soul, who is not inclined to fight or look for trouble, but he possesses great courage when put into a tight corner. He is quite shy and retiring in his demeanor, and somewhat gawky around people he doesn't know very well. He is perhaps more confident when he is in a small group of people, rather than in large groups, so he is the quiet one of the company. Being a rather young dwarf, he is quite impressionable and biddable.

His choice of weapon is quite unusual, even more so than that of Kili, as he carries a sling shot - whether this is a testament to his courage, or naivety, it is difficult to say. Ori's prize possession and his musical instrument of choice is the flute, which he plays very well. Its size makes it quite portable and easy to fit in his traveling pack next to his writing materials. One activity that he enjoys which he obtained from his mother is knitting, and he enjoys coming up with ingenious ways to colour dye wool, a skill that is also useful for his art and writing.

The one dwarf who can have both a positive and negative influence on him is Nori. At times, Nori is a scoundrel, and is viewed with suspicion with by other dwarves due to his thieving nature, but Ori views him differently with him being his brother, and this, in conjunction with his naivety can land him in trouble. Life for all the exiled dwarves in Ered Luin is hard, but more so for Ori and his family because of their circumstances. Because of Nori's antics and his mother's circumstances, Ori often experiences prejudices from other dwarves, espeaically those who hold more strictly to honour, and dwarven traditions, or those who are stiff-necked. As a result of this, Ori has a desire to prove that he is more than what he comes from.

Ori is the youngest of three brothers, the oldest of which is Dori, who was born some time during the War of the Dwarves and Orcs between TA 2793 - TA 2799. Nori is the middle brother, who was born some forty years after Dori, around T.A. 2833. Ori's family background is quite unusual for a dwarf, given that, typically, dwarves tend to have only one intimate partner during their life time, being of a loyal and stubborn temperament to the one they love. To do otherwise is considered a source of shame for dwarves and it is not often something that is done, or indiscreetly at least. Ori's mother, Skafid, didn't just have one partner, she had three. Skafid's suitors were a group of three friends that had fallen in each other's company during many wanderings, and became followers of Thror in the years that the dwarves spent in Dunland.

Hlevang, the leader of the three, was a Longbeard and a descendant of Durin, with his line being long removed from the royal line that there was never any chance of him being an heir. Similarly, Skafid herself was of a similar background, but from a different, long removed branch. Hlevang and Skafid became lovers, though it is unknown if they ever officially wed - records from those years were sketchy and, after the Sack of Erebor, most dwarves were grateful just to have anything that resembled a normal life. Dori is the result of that union. Hlevang, unfortunately fell in battle during one of the many skirmishes that made up that war.

After his Hlevang's death, his two friends vowed to look after Skafid and Dori. It is from those two friends of her lover's that Skafid gained her two younger sons, Nori from Athiof and Ori from Moidvithir.

Athiof is a dwarrow with a bad past, and despite his short-lived attempt to become a respectable dwarf by fighting in the war against the orcs, he soon went back to his old ways, and even without his disreputable tendencies, he would have been a dwarrow to be viewed with contempt by other dwarves. Athiof is a descendant of the Firebeards, one of the two dwarven tribes to have lived in the Blue Mountains during the First Age and one which gained a bad name for starting the conflict between dwarves and elves after the murder of Thingol in a dispute of the Nauglamí. Although it was a long time ago, the stigma of being a Firebeard still remains, and whether deservedly or not, have a reputation for being thieves and layabouts. Without Hlevang to give him stability, Athiof often disappeared for long stretches at a time, getting into trouble, returning unexpectedly, and wandering off again. The last time he did this, he didn't return and no one knows what's happened to him, whether he's forsaken his oath to look after Skafid and Dori, if he's locked up somewhere after being caught stealing, or if he's dead, as a direct consequence of his bad behaviour, or killed on the road by orcs or other brigands.

After the disappearance of Athiof, Moidvithir stayed with Skafid for a time, and eventually became her lover, with Ori being the result. Now, Moidvithir had always been plagued by wanderlust, and he was torn between his desire to wander and his obligations to Skafid and her family. He also felt that he had an obligation to find Athiof and bring him home. Eventually, he convinced himself that if he found Athiof that he would be doing Skafid and her sons a great service - if he was back with her then perhaps he would be free to travel again. One day when Ori was still quite a small dwarfling, he left on the pretext of finding the lost Athiof. The problem was no one knew where the Firebeard had gone, only that it was likely to take a long time to find him. Time passed, and Moidvithir never returned home. His fate, like Athiof was unknown, though secretly in her heart Skafid suspected that he had gone back to his own lands in the far east beyond the Sea of Rhûn, or gone gallivanting off elsewhere in Middle-Earth. She did not really know what to tell Ori as he grew older and never spoke of him if she could help it.

Up until the quest to regain Erebor, Ori has lived quite a sheltered life, but it was not perfect. Being only very distant kin to Thorin far from the royal line, he did not enjoy all privileges that came to those within the royal circle, and his social position has been complicated by the situation that his mother found herself in, for unlike most dwarves, she did not restrict herself to one partner, (she had three, in total), and as a result, Ori is only the half-brother to Dori and Nori. Ori's mother gave birth to him rather late in life and as a result of this, there is a large age difference between him and Dori. As a dwarfling, he became very much aware of the snobbery and contempt that others held towards him, which was very hurtful for the young dwarf. Had the only mark against him been that his mother had more than one partner, then he might not have experienced this prejudice as much, for some of her difficulties came about from the War with the Orcs, and she had some good connections for she too was distant kin to Thorin. Dori was highly regarded because of his hard work in the mines and having spent some time as a soldier, guarding Thorin's Gate from goblin incursions before settling on his current occupation. The difficulty came with Nori's tendency for thievery, gambling and dishonesty, and it was suspected by some that Ori would go down the same path.

At times, this suspicion was quite reasonable, because Nori's iife style held some fascination for Ori, and there were times in Ered Luin that the young dwarrow got himself into some troubles. This was made worse because Ori's father abandoned him and his mother for adventure of all things because prior to entering into a relationship with her, he was a well-traveled dwarf. The fate of Ori's father is unknown. Gaining a good income was not easy in Ered Luin, in part because the dwarves had lost everything after the Sack of Erebor, and because most of the precious metals and minerals had been removed from the Blue Mountains many ages ago, so it was easy to see how the life of a thief or a conman was attractive to some dwarves, and for the young, there was also the added lure of excitement of such a life. It was Dori, determined that Ori shouldn't go down the path to criminality and Ori's fascination with learning and art that saved him from such a fate, but it was still a difficult task convincing others that it was worth giving Ori a chance to better himself. Balin saw his potential, and took him under his wing.

Whether it was Nori's influence, or some kind attraction to adventure that came to him from his father, when the preparations were being made for the quest to regain Erebor, Ori just knew that he had to go, despite what his mother, and oldest brother might think and wish for him to do instead. There was the added incentive of changing other dwarves' perception of him because of his early mistakes if he was part of the company to regain their lost home. (The possibility of discovering lost scholarly treasures and art that would improve his craft and give him new knowledge had not failed to cross his mind, either.)

The Profile is a work in progress, as more needs to be added to History...