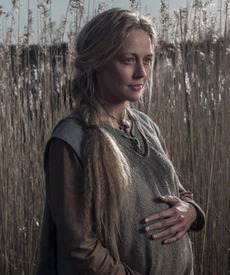 RACE: Dwarf
RELATIVES: Sons: Dori, Nori, and Ori. Lovers: Hlevang, Athiof, and Moidvithir.
GENDER: Female
AGE: 75 at the beginning of the War of the Dwarves and Orcs. Born T.A. 2718

Skafid has long blonde hair which is usually braided after the manor of a dwarven widow if she can be bothered with it, sometimes it's untidy and tied back. She keeps her beard short too, as an indication of the hard life she's had. Though once, when she was young, she would have been considered a beauty among dwarrowdams, life experience and constant worry give her a rather haggard appearance. Clothing wise, her usual attire is plain and simple, usually home made and has little adornment. Her clothes usually retain their natural colour because poverty and scarcity of dyes in their current home means that her clothes are usually of a natural colour. Any beads and jewellery which she wears (which is not much for a dwarf) are made of low value metals and the commonest of gem stones.

Skafid's outlook doesn't extend a great deal beyond the struggles of caring for herself and her family, so she is quite inward looking. She has little time and patience for those who are not her own family as all her energy goes into keeping her head above water and to ensuring that her sons are looked after, which is not easy without a partner. Her feelings towards dwarf men have become quite sour and bitter due to her abandonment by not one, but two dwarrows - she feels now that rather than helping her, they just took advantage of her vulnerable situation. Hlevang, she is more forgiving of since he died in battle in the name of their king. Nori's thieving is a constant source of worry for her and she fears that he will meet a bad end, and she is concerned that Ori may go the same way. Dori is one of the few blessings in her life. She hopes that a father figure will come along to guide Ori in the right direction, though it is unlikely that she would open her heart to another dwarrow again.

Skafid was born in 2718 of the Third Age to a noble house in the Iron Hills. The blood of Durin runs through her veins, though she is too distantly related to the royal line to ever have a chance of being on the throne, or even ruling one of the many minor settlements of the Longbeards. As such, she starts out life rather respectfully in contrast to how she ends up in later life. At the time of the Sack of Erebor, she was a young dwarrowdam of 52 years of age, making her the dwarven equivalent of a teenage girl whom would have been 13 or 14 had she been of the race of Man. Her family offered shelter to some of the refugees who came from Erebor and this was how she met Hlevang, a young refugee of Erebor with a similar heritage of her own. Sometime afterwards, a dwarven visitor from the East found his way in to the Iron Hills - and this was Moidvithir, whom quickly became a friend of Hlevang and an acquaintance of Skafid. While out hunting one day, Hlevang and Moidvithir came across a dwarf who was having problems with a roving band of Easterlings that had strayed into the lands close to Grór's Halls. That dwarf turned out to be Athiof, a dwarf with a mysterious past, a Firebeard of Ered Luin and became a close friend of Hlevang's.

As she grew closer to coming of age, Hlevang began his courtship of Skafid, and shortly before the death of King Thrór at the hands of Orcs when he sort to regain Moria for his exiled people, Skafid accepted Hlevang's betrothal. They were due to be married, but the out break of the war put it back. Hlevang and his friends joined Nain and Dain Ironfoot to answer Thrain's call to avenge his father, with Skafid following with the baggage train to support the army. The war lasted for six years and during that time, Dori was born to Skafid out of wed-lock, as the uncertainty of what would happen in the war made their marriage look unlikely. Hlevang lost his life in the war, leaving Skafid alone to bring up their son. Skafid's family, angry at her impatience, disowned her, and she made her home in Ered Luin. Athiof and Moidvithir accompanied her, seeing as they felt it was their duty to care for her after Hlevang's death, espeaically since her family had disowned her. Life was difficult in Ered Luin - it was a poor substitute to the Halls of Erebor and the Iron Hills in many ways. With her reputation put under scrutiny over Dori, this was made worse when rumours began about her relationship with Hlevang's companions. Nori was born in T. A. 2833 after she had liaisons with Athiof. Athiof was not a dutiful father, despite his good intentions when he vowed to look after her and Dori in memory of his friend, and often disappeared for various lengths of time. He was known for getting into trouble with the authorities and one day he left on one of his wanderings and never returned, his fate unknown, leaving Skafid to bring up Dori and Nori alone. For a while, Moidvithir took Athiof's place, but he was given to wandering and was not the best choice of a father. Eventually, he left her too, on the pretext of finding what had become of Athiof. This was after Skafid had given birth to Ori, in T.A. 2871. By the time of Ori's birth, Dori had come of age and took it upon himself to care for his mother and youngest brother. He became a miner and worked hard to provide for them.