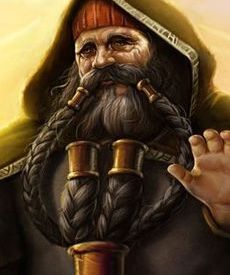 RACE: Dwarf
RELATIVES: Longbeards that are high up in the social order, but not closely related to Thorin and the royal line. Probably has connections to the other dwarf clans, particuarly the Broadbeams.
GENDER: Male
AGE: 186 - Born in 2755 of the Third Age

Lofar is very traditional in appearance for a dwarf. He is of an age where he has been able to grow his beard very long, which is black, and shot through with silver. He binds it up in braids which are fastened with golden beads and rings. He does the same with his hair. He falls short of actually wearing a colourful, pointed, floppy, garden gnome-like hat, but he is very stereotypical 'dwarf' in appearance. He is 1.34m (4' 5'') in height and is quite stocky - muscle that is turning to fat because he is less active than he was in his youth. He is around 54kg (119 lbs) in weight.

Lofar has a tendency to be very grumpy and bad tempered, and has an air of 'the servant is more regal than the master' about him. Lofar is quite opinionated and does not hesitate to voice his views, especially on matters he disagrees with, or finds irritation with. He frowns absolutely on anything which goes against dwarven custom, which is something which has been instilled in him since he was born - dwarves of Kili's generation, if they were born and raised in exile do not share Lofar's stiff-necked attitude about it. However, despite his apparent unfriendliness, he is very loyal to those he serves.

Lofar comes from a long line of dwarves who have served the House of Durin, going back almost to the days of the Father of the Longbeards himself. He is very proud of his family's long service and legacy and is delighted to be serving Prince Kili, (though he would have preferred to have been appointed the housecarl of Fili instead, with him being the heir to the throne.)

Lofar is from the Iron Hills and for along time worked for Dain and his folk. He agreed to become Kili's housecarl at the suggestion of Lord Balin, who knew of of Lofar's family's long service to the line of Durin. This was agreed during the time of Kili's recovery when Kili unable to make decisions like this for himself. As such, Lofar's appointment as his housecarl is not Kili's own choice, which can sometimes be a source of discord between them. Kili accepted the appointment, in part because of his vulnerability due to his injuries, his inexperience and because of his trust in Balin's wisdom. The Prince trusted Balin to not appoint anyone or do anything on his behalf that would cause him harm.

Lofar is a difficult housecarl to deal with, but his loyalty and knowledge of how Kili's actions will be perceived by other dwarves has proven useful, even if the Prince ignores his advice at times. Lofar's usefulness to the Prince lies in his honesty even if he's not always tactful at putting it across.

Lofar disapproves of the appointment of Beyla as house keeper because he has a dislike of disruptive children. (Note, children don't have to actually be disruptive for him to dislike them - they just have to be children, and he sees all children as being disruptive!) As he is a very traditionally minded dwarf, he is of the opinion that a widowed dwarrowdam and her children should be under the care of her birth family, or that of her husband's, not independently employed as she is.

He also disapproves of Kili's relationship with Lyndheid, because she is not of noble-birth of any of the dwarven houses, not even of the disgraced House of the Firebeards, which many dwarves frown upon because of their part in starting the enmity between the dwarves and the elves, particularly those of Thingol's House during the First Age. To make matters worse (in Lofar's eyes), Kili did not court Lyndheid in the traditional dwarven manner and Lofar dislikes her because of her undwarf-like interests and hobbies.