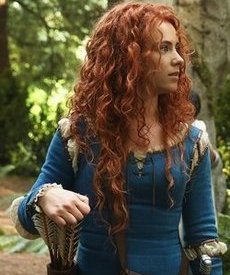 She normally wears simple clothing, usually made of wool, or linen. While growing up, and on her travels after being forced to leave her home, she wore drab un-dyed, practical clothing. This was due to having difficulty accessing fine fabrics and dyes. If they were able to find something finer, her mother would use it to decorate their home, rather than use it for clothing. Most of her clothing was made by her mother while growing up and she learned her craft from her. Since settling in Erebor, she has been able to devote her time to making finer clothes, but she still prefers to wear simple garments. She wears different kinds of garments, trousers, jumpers, skirts and dresses, though the skirts and dresses are more frequently worn on special occasions, rather than for every day. The exception to this was while she was carrying Nali - she wore dresses then because they were more comfortable, especially during the later stages.

Lofnheid is a rather shy and quiet dwarrowdam who prefers to stay at home working on her projects than adventuring, but she will travel if the need arises but the circumstances have to be very exceptional for her to do so. The drawback of staying at home a lot is that she finds it lonely at times and would like to spend time with other dwarrowdams (or dwarrows!) who have the same interests while she's working. She is kind and gentle. Her family are the centre of her existence and the loss of her parents and brothers deeply effect her. She does worry about her more adventurous sister, especially when Lyndheid is off on one of her adventures. She does know how to defend herself, at the urging of her aunt, and has sword practice with Kili and her brother-in-law a couple of times a week, but it is something she doesn't enjoy. Her strengths lie in her attention to detail when she works on her projects and the patience she possesses to complete them, something which also comes in handy with caring for a young child.

Lofnheid is unambitious and wishes for a quiet life, something that has not always been easy to achieve, what with spiders, conflicts with the men in her village and the troubles that have broken up her family.

She fears losing her sister, especially after what happened to her parents and brothers. She is afraid that she will never see her sister again and that she will never live among her own kind. It goes without saying that she fears the spiders of Mirkwood forest, is mistrustful of the elves and is afraid of the dragon that forced her people out of Erebor, even if it happened before her birth. She is not a coward, however - she has a courage that is deeply hidden and which surprises her when she needs it.

Lofnheid is the youngest of five siblings, born to the dwarven blacksmith, Hredimar and the dwarven healer, Svarri. She was born in the year, 2851, and lived in her childhood years with her family in a village of Woodsmen of Mirkwood, near Rhosgobel, the dwelling place of Radagast the wizard. Her early life would have been lonely, had it not been for her older siblings, Lyndheid, her sister, and her brothers, Fafnir, Regin and Ottr.

Of all her siblings, she is the least adventurous, preferring to spend her days working on the needlecrafts and jewellery making that her mother passed on to her, and helping to care for the sheepdogs that her mother bred and trained. As such, she is known as a keeper of collies. Her early life with her family among the Woodsmen was a happy one, even if at times it was fraught with the difficulty of her family not living among their own kind. As they were the only dwarf children in the village, there was often conflict with the children of the Woodsmen because of their differences. Fafnir, in particular, would often get into fights, sometimes to protect his siblings from bullying, sometimes not, because he had a fierceness in him that he couldn't always control. When she reached the age where she started to grow a beard, she, like her sister Lyndheid, took to the practice of shaving it off in an attempt to fit in with the other women of the village, but her short stature is something that she could not change and always marked her as being different. Shaving off her beard is an habit which she continues now.

There were dangers growing up in the forest due to the increasing incursions of spiders and orc attacks, so in her early years she hardly left the village. If truth be known, the forest intimidated her a little, and she was afraid of it, something which earned her a certain amount of teasing from her older sister. She never entered the forest alone - and only went in with her father, or with her older brothers and Lyndheid in her company. In contrast, her two oldest brothers, Fafnir and Regin and Lyndheid were much more inclined to fight the darkness than she was. Ottr's attitude towards the forest was very strange indeed for a dwarf because he loved it would often go exploring, an habit which Lyndheid picked up quite readily. Of all her family, Lofnheid felt closet to her mother, as she was the one she spent most of her time with. Being the youngest in the family, her parents and siblings, especially her father and brothers, were more inclined to protect her, and this is probably where the shyness and reluctance for adventure spring from.

In addition to trouble from spiders and orcs, there was the occasional altercation with the elven guards of Mirkwood, mainly due to travelers causing problems as they traveled through the village, not that this happened on a regular basis. The elves of Mirkwood are territorial and not always welcoming of those who venture into their realm, and not all travelers are begin. Lofnheid's parents had a cold but polite relationship with the elves, having not forgotten their refusal to help their people when Smaug attacked Erebor all those years ago.

The forest was variable in what it provided - sometimes the pickings were good and plentiful, sometimes it was a struggle. Hard times also brought conflict with it as the different Woodsman villages would sometimes squabble over resources when they were scarce. As time wore on, a shadow began to settle and grow in the forest and this caused mistrust to spread, and conflicts to become more frequent.

Life was far from easy in the forest, being away from the riches of her people, and poverty was a constant problem for her parents, so when her brother Ottr was killed by a powerful being, and gold, and a magical ring given in ransom to her father to compensate for his son’s death, it was initially greeted with enthusiasm. Unfortunately, there was a curse laid upon the ring, and Fafnir and Regin both hungered for the possession of it and the gold, which resulted in the deaths of the brothers and her parents. Lyndheid, vowed to destroy the ring, so that it wouldn’t cause harm to anyone ever again, and took on a quest to destroy it, leaving her sister in the Woodsman village. As time passed, there was no word of her sister, so Lofnheid began to suspect that her sister had joined her brothers and parents in the Halls of Mahal.

Harassment from the spiders increased, and eventually the village was destroyed, and abandoned, forcing the inhabitants to leave. Assuming that Lyndheid would never return, she took her mother’s surviving sheepdogs and set out for a safer place to live, braving the forest alone for the first time in her life. She took what she could from her childhood home, including the weapons that once belonged to her father and brothers. Lyndheid had taken their mother’s sword when she left to destroy the ring. The forest was not easy to navigate, it always seemed that the path before her changed, becoming closed off, turning direction and making her go the wrong way. In the end, she trusted in the sheepdogs as they seemed to be better pathfinders in the forest than she. After a long and dangerous journey, she eventually arrived in Lake-Town, where she lived until Smaug was woken from his sleep and destroyed the town.

Then, a curious thing happened - it seemed that the king had returned to the Mountain, but due to the hostility of the Lake-Town men towards Thorin and company whom they blamed for the destruction of their home and the impending hardship of winter, she kept out of things as much as possible. A dwarrowdam in a group of Men? It was a dangerous prospect, but thankfully, her experience of growing up in a village of Men meant that she knew how to deal with them and she tried to remain as unobtrusive as possible. This was even more important for her when the elves arrived. She worried about the fate of the king and his companions in the mountain, but what could a lone, untrained in combat dwarrowdam do to help?

The tensions increased, it appeared that war between the dwarves of the mountain and those who had them besieged would break out - and then -

The Battle of the Five Armies broke out and all of Lofnheid's faculties were focused on surviving that! She kept out of the fighting as much as she could, keeping herself and her dogs safe. She never thought that she would encounter anything more terrifying than seeing her family tear itself apart over that blasted trinket following the murder of Ottr, but this battle came extremely close to it.

Towards the end of the Battle, she encountered Andvari, Loni and Bild for the first time and they set about trying to help the survivors, having arrived too late to be involved in the fighting.

Once the Battle of the Five Armies was over, she was able to learn more about her new companions - the first dwarves she'd ever met outside of her siblings and parents - Andvari and his brother, Loni and more joyfully, her Aunt Bild. She'd never imagined that she would meet another member of her family, as she'd thought that they'd all gone to the Halls of Mahal.

After the Battle of the Five Armies, she took up residence in Erebor and met her future husband, Andvari and his brother when dwarves returned to the mountain. In addition to meeting her One, she discovered that her Aunt Bild was still living, who had taken on Andvari as her apprentice. She married Andvari and they had their first child, Nali, together, who was born in 2945.