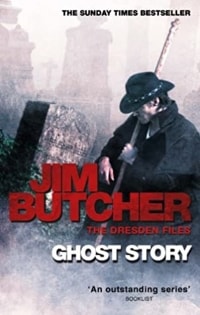 Meet Harry Dresden, Chicago's first (and only) Wizard P.I. Turns out the 'everyday' world is full of strange and magical things - and most of them don't play well with humans. That's where Harry comes in.

Harry Dresden forgot his own golden rule: Magic - it can get a guy killed. Which didn't help when he clashed with unknown assailants intent on his murder. And though Harry's continued existance is now in some doubt, this doesn't mean Chicago's resident professional wizard can rest in peace. Trapped in a realm that is not quite here, yet not quite anywhere else, Harry learns that three of his loved ones are in mortal danger. Only by discovering his assailant's idenity can he save his friends, bring criminal elements to justice, and move on before he becomes trapped in his own unending nightmare.

It would just be easier if he knew which three friends were at risk. And had a (working) crystal ball. And had access to his magic. Instread, he must accomplish his mission unable to interact with the physical world - invisible and inaudible to all but the most speacialised of magical talents. He's also far from the only silent presence roaming Chicago's alleys. Hell, he put some of them there himself. And now, they're looking for payback.