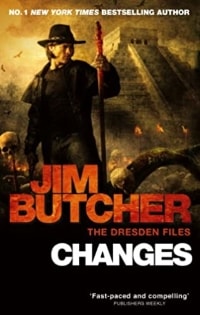 I answered the phone, no big deal, until I heard the message: 'They've taken our daughter.'

Harry Dresden, professional wizard, has never faced anything like this before. Arianna Ortega, Red Court vampire, blames Harry for her husband's death - and she's out for revenge. So her discovery that Susan Rodriguez had borne Harry a daughtr in secret was an unexpected gift. Arianna's next step was to kidnap the girl, and now she plans to use her blood in a violent ritual sacrifice designed to kill Harry, Susan and their daughter.

Harry is massively unprepared both emotionally and in terms of firepower. Susan had disappeared to South America following an attack by his enemies that left her cursed. And with the White Council of Wizards and the Red Court in a state of truce, reinforcements are precious thin on the graound.

With the life of his child at stake, Susan's humanity hanging in precarious balance, and with his own death looming, Harry Dresden must find a new source of strength. In the past, there had always been a line Harry wouldn't cross. Though sinister forces have tempted him time and again, he had never given in to the full fury of his own untapped dark powers.

But then, only his own life was at stake.